Ilya Lipkin and Joen P. Vedel are at the Baltic Art Center on behalf of Downstairs Productions, a film production company operating out of a basement in a suburb of Copenhagen.

We are in the business of making movies. This includes everything from shorts played on late night public-access television, to glamorous features screened at Cannes, to art films made for the biennial circuit. Downstairs Productions is organized around a flexible company structure that fluctuates depending on the circumstances of a specific project. No one gets paid very much, if at all, and the best employees measure out their rewards in the excess minutes they can grab during a lunch break. Still, whether they are on a truck moving equipment, or in Brussels, flirting at a cocktail party, everyone is always working. At Downstairs Productions life and labour are one, at last.

Our current production began, unremarkably enough, when we noticed a foul smell in our basement office. Disgusted, and mildly alarmed, we searched the premises. Finding nothing amiss, we realized that the stench – which grew worse by the day – was in fact coming from Sweden. It was wafting in through our window, carried along by the breeze from across the Øresund. Despite, or perhaps because of, its unusually strong nature, the scent was not unfamiliar to us here in Denmark. Sickly, sweet, and slightly nauseating, it had the distinct character of week old garbage left out to rot in the sun.

However, where some smell garbage, Downstairs Productions smells a movie. And so, we travelled to Sweden – to Gotland to be precise – in order to investigate further.

Upon our arrival in Visby we knew our noses had not steered us wrong: the air over the town was simply putrid. A few days later, a conversation with several locals shed a bit of light on the matter. Over drinks, some claimed that the smell had always been there; others suggested that it coincided with election years, and that it had gained strength in the preceding decade. Subsequently, a group of youngsters warned us that during the political gathering of Almedalsveckan, one absolutely had to wear a respirator. They were, of course, correct.

Now, with the politicians having come and gone, we carry on with our investigation. What rotten corpse could possibly be behind such an offensive odour? 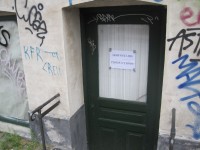 This residency is made possible by Mobility Grant from the Nordic Council of Ministers and the Cultural Ministries of the Baltic States.