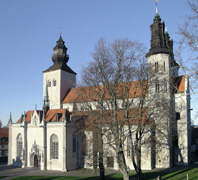 When the American Army took Falludja in Iraq, they were accompanied by ”Hells Bells” (AC/DC) that was emitted from large speakers while the imams’ call for Jihad could be heard from the minarets. Music, religion and cultural identity are the main elements in Henrik Andersson’s new work shown at BAC in Visby. The central piece in the show uses the chimes of bells at Visby Domkyrka [The Cathedral Church S:t Mary of Visby] to emphasise how sound is used in public space and the strong influence that Christianity has upon our cultural identity.

“Repetition” emerges from an interdisciplinary ambition where the values of different institutions interact. Here the church and art are represented and both of them have to a large extent a shared history. In a similar way, through highlighting their inherited classically shared ground, historical reconnections are being made between a European and an Arabic music tradition.
The church building in Visby has its roots in the Middle Ages and it was during this time that music theory in Europe was developed under Arabic influences. For example, Al-Farabi’s monumental piece The Great Book of Music was at that time read at the Universities in Paris as well as Baghdad. Against many people’s belief, the European and Arabic tradition of music has such a close relation that they can be said to be each other’s prerequisite rather than forming opposites. Andersson’s piece makes us see how cultural differences are constituted and created from an idea. In the present day when large conflicts of interests signify these two cultural areas’ relationship to each other, a piece such as “Repetition” asks important questions about humanism, identity, similarity and difference.

There are three more pieces included in the exhibition. A beautiful double bass stands as a representative for the sensuality of art and the refined manipulation of matter. Through Henrik Andersson’s interpretation, art here becomes degraded and the human touch has become mechanized as an eternally sounding note is delivered by the spinning wheels of a parasitical toy model of a macho-looking jeep.
Through showing a similar playfulness and complexity, a map in the room leads one’s thoughts to the interactive world political games by Öywind Fahlström. References to politics, music and art, give an account of the global situation. The map also signifies our subjective view of the world and is a reminder that even this most common representation of our world-view is a construction.
The last piece in the show is a recording of the Folkpartiet [Swedish political party] program speaking for integration and the enforcement to acquire Swedish language skills. Here the reading is made by a German automatic text message service that interprets the text as either German or English. When the text’s origin cannot be identified, it is forced into a stereotyped form that makes it almost incomprehensible.

Music and sound are recurring themes in the practice of Henrik Andersson. He concurrently shows a new sound piece “If it’s not love then it’s the bomb that will bring us together” at Index in Stockholm. Here the starting point has been the frightening power of a nuclear explosion and its low frequency vibrations reaching through the whole planet and the artist has transformed these vibrations into a threatening rumble.

Henrik Andersson was educated at Högskolan för Film och Fotografi i Göteborg [The School of Photography and Film at Göteborg University] and Konstfack in Stockholm [The University College of Arts Crafts and Design]. He has previously shown work at Moderna Museet, Färgfabriken and Hamburger Banhof in Berlin. Additionally, he has completed the Curatorial Program at Konstfack and has been the Co-Curator for Gothenburg International Art Biennial.BAC (Baltic Art Center) supports new work as part of the Production-in-Residence program. Henrik Andersson will be affiliated with BAC during 2005, and was nominated by Mats Stjernstedt (Index, Stockholm).