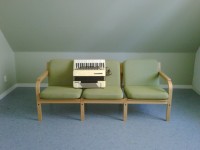 With the help of technology, soon (hopefully) humanity will have some extra time – a life expectancy significantly longer than now. Will it feel a bit like an extensive holiday or will it be a nightmare of repetitive boredom? Will it be possible to spend this extra time on learning? If so, what would happen when the old memories fade out making room for new experiences? Will it be possible to go on learning indefinitely? How will it affect social structure? Is it possible to test life prolongation effects on human memory and social behaviour?

The goal is to create a small keyhole in the memory to see behind the door of time. To look both ways, into the past and the future. It will work as a procrastination in reverse. Doing today what is normally to be done in 60 or 100 years. Doing that for two months, it will provide a shunt between two points in time: one point in the present, another in the far future. This is an experiment: during the residency an imaginary, second point (in the far future) will become clearer, and in the end a typical effect of “before and after” will be perceived by the subject and the witnesses.

During two months of residency in Visby I would make an effort to learn to play the accordion. The aim is to learn to play well enough to be able to continue practicing on my own, and eventually to form a one-man accordion orchestra called “Visby Stitch”.

This idea is dedicated to the ‘Biosphere 2’ experiment conducted in Arizona desert in 1991 – 1994.

How to know if the things you like are really nice?

No matter how unattractive something seems to be now, your preferences may turn upside down. Is anyone familiar with a situation when you start liking food, toys, films, books or another thing, familiar but completely disliked in the past? The explanation is simple – sometimes you need more time to understand, to grasp the essence. Sometimes some things need a better version of you. Your dislikes and inclinations swap positions, options change strategy, and the world slowly flips revealing its mirrored picture.

Assuming that sooner or latter you will probably like what you dislike at the moment, the question is: is it worth the effort to like things in advance?

Novelties force themselves to be liked (or, novelties force you to like them), because it is the only way they can survive. Such an “imperative of modernity” could be applied in a number of fields, say, art. Art is rarely innovative, because if it were, it would be unrecognizable as art, and most likely it wouldn’t be recognizable at all – and so it could not survive. Unless it would be liked as such.

So there is a category of things, which can be called “must like”, while one can choose to like or dislike other things. Hence the question is: is it worth the risk to put something aside to like it later?

The text was written for a reading performance at Structures of Nothing, a workshop-event held by Jennifer Teets at Sutro Baths, San Francisco. (2009)

Darius Mikšys has participated in many projects among them “PR 04” in Puerto Rico, the 16th Biennale of Sydney, the 9th Lyon Biennial, Performa 09 in New York. His projects vary from a video documentation of a visit to the Parapsychology Fair at the Vilnius Sports’ Palace to organizing of artists’ parents meetings, selling an empty bottle of perfume on e-bay, procrastinating lecture On Procrastinating, proposing an ABBA museum in Qantas plane for Tempelhof airport in Berlin, and establishing Vilnius cricket club.

Darius Mikšys will be at BAC during April and May. He has been invited to BAC as part of the Artist-in-Residence programme for Nordic and Baltic artists funded by the Nordic Council of Ministers.