During 2003 parts of the collection from Moderna Museet (Modern Museum of Art, Stockholm) is touring Sweden. And now the exhibition has come to BAC and here Ann-Sofi Sidén’s much acclaimed video installation Warte Mal! is shown. The installation documents the prostitution and the trafficking of young women across the German-Czech border. In a manner close to journalism Sidén reveals and shows the connection between prostitution and the disintegration of Eastern Europe. Today, three years later, Warte Mal! is no less important. Quite the contrary. Apart from Warte Mal! a selection of photographs from Moderna Museet’s collection of photos by Christer Strömholm, Anders Petersen, Tore Johnson, Walter Hirsch and Hans Malmberg are shown. The selections are made by the artist Annica Karlsson Rixon. 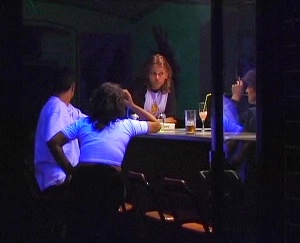 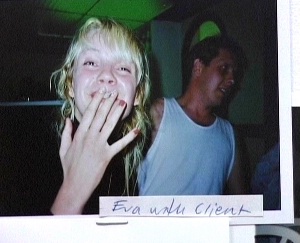 On several occasions over a period of nine months in 1999 the artist Ann-Sofi Sidén filmed in the city of Dubi, situated in The Czech Republic close to the German border. The city is a centre for the mass prostitution that flourishes along the borders of the former communist regimes and Western Europe, and where above all women from the earlier closed Eastern block sell their bodies to passing men. Sidén stayed at the Motel Hubert together with the people she filmed and her work resulted in the extensive video installation Warte Mal! (Hey Wait!). On monitors in strictly designed rooms a multifaceted selection of voices from a macro political society comes forward. Without moralising and favouring content over the aesthetic Sidén allows each individual to tell her story. On big screens scenes from the life in the city and entries from the artist’s diary are projected. Prostitutes are often portrayed in films and art, but the observer rarely gets the chance of such humanistic and profound insight as in Warte Mal!.

In mid December last year came the news that a 13-year old Russian girl had escaped from a van on Klarabergsviadukten in Stockholm. The girl told the police that she and an 11-year old Iranian girl had been held captive in the van and sold as prostitutes to Swedish men. At the time I sat in the Moderna Museet just nearby watching the video films from Sidén’s installation. I had been invited to make a selection from the museum’s collections to be exhibited at Baltic Art Centre in Visby. Later a brief paragraph in the press said that the case of the 13-year old girl had been closed due to lack of evidence. Recently the police found a list containing over 100 names of men who had bought sex, from among others 17-year old girls from Estonia. Sidén’s work feels more and more urgent – here and now.

That women are sold in different ways to satisfy men is not anything new. Therefore I have also chosen to show a selection of documentary photographs that in one way or another correspond to Sidén’s work. The photographs are taken during the 50s, 60s and 70s by five Swedish photographers Christer Strömholm, Hans Malmberg, Tore Jonsson, Anders Petersen and Walter Hirsch. 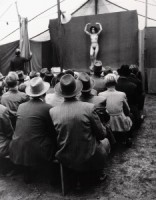 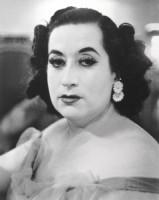